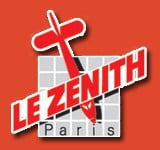 Zenith de Paris is a concert venue located in the 19th district of Paris, in the Parc de la Villette, near the Canal de l’Ourcq. The concert venue can seat 6,300 people, which makes it quite a lot larger than most indoor venues in Paris, but still quite a lot smaller than for example Bercy.

Zenith de Paris was opened as a concert venue in 1983, in fact it was built to replace the Hippodrome de Pantin. Since then such Zenith venues have been made in several other France cities such as Strasbourg, Toulouse, Montpellier, Nantes, Clermont-Ferrand, Rouen, Dijon, Pau, Toulon, Saint-Etienne, Caen, Orleans, Nancy, Amiens, Lille and Limoges.

Among the famous artists who have performed in Zenith de Paris you can find for example Celine Dion and Katy Perry.