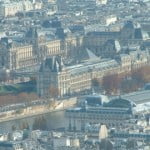 Louvre was orignally a Royal Palace, but today it is famous because of the museum found on the inside. The first palace was built here in the 12th century, which rather looked like a fortress. During the reign of Charles V they expanded the building and later several other rulers kept on building more and more to the original palace. Kings lived here until the end of the 17th century. As they moved out the palace started falling apart, but Napoleon started the renovation work as he moved into the palace again.

Since 1973 Louvre is the largest museum of Paris, and here we can see works not only from Europe, but also from the Islamic, the Eastern and the Greek culture. There are many paintings to be seen in Louvre, the most famous probably Leonardo da Vinci’s “Mona Lisa”. You are not allowed to take pictures here, and guards keep on telling tourists all day long not to make pictures of Mona Lisa. She is also protected behind a glass, to make it even harder to get to her.

In addition to Leonardo da Vinci’s Mona Lisa you can also find the works of Rafaello, Tiziano, Rembrandt and Van Dyck here. There are also many objects and statues to see in Louvre, for example “Venus de Milo.”

The glass pyramid which is the entrance into the museum, has turned into the symbol of the Louvre museum. It is almost 22 metres high and 36 metres wide. This pyramid also played a very important part in the film “The Da Vinci Code.

Would you like a guided tour in Louvre? Visit Viator for booking.
[stextbox id=”info” caption=”Latest news from Louvre”]