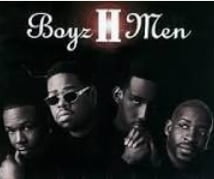 The Boyz II Men are an American R&B vocal group which is best known for cappella harmonies and romantic and emotional ballads. The band is a trio composed of baritone Nathan Morris and the two tenors Wanya Morris and Shawn Stockman.

Originally the band was a quartet featuring Michael McCary too. They became successful and famous during the 1990s when they released their number one single the End of the Road in 1992. The song was ranked number one on several charts and brought an international fame for the band. Later they released two other number one singles the I’ll Make Love to You and the Sweet Day which was recorded with Mariah Carey. The Boyz II Men released their last studio album Twenty in 2011. Michael McCary left the group because of health issues but the band continued touring as a trio.

The Boyz II Men are on a tour this year 2014. They visit and perform in several countries all around the world. The Boyz II Men are giving several concerts in different cities and states in the USA and later this year they will be on stage in multiple European countries as well such as Denmark, Germany, the Netherlands, Belgium and in France too. In France the concert will take place in the French capital, Paris. Boyz II Men will perform in Paris at Palais Des Congrès on Wednesday 3rd December 2014.

For more information on concerts and events in Paris, click the link.