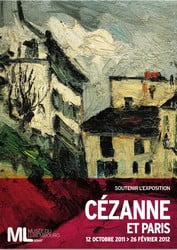 Cézanne (1839-1906) is by many associated with Provence, he also did a whole lot of work and made paintings in Paris. This exhibition named “Cézanne and Paris” in Musée du Luxembourg will show you the influence of Paris on Cézanne. The exhibition opened on October 12th in 2011 and will be open for 17 more days, closing up on February 26th, 2012. The exhibition is divided into five parts named:

1 – Following Zola to Paris
2 – Paris, the City beyond the Walls, near Auvers
3 – The Temptation of Paris
4 – Pose like an Apple. Still Lifes and Portraits
5 – The Paths of Silence