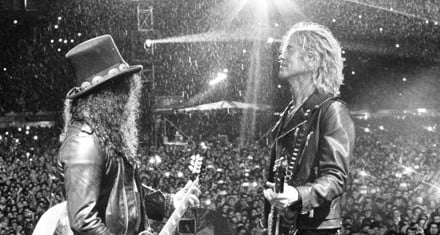 There will be loads of fantastic concerts in Paris this summer. One of the highlights will however be on July 7th as Guns N Roses perform at Stade de France.

Back in 2012 Guns N Roses performed in Paris last time. Then they performed in the venue Bercy, so this time as they come to perform at Stade de France it will be a much bigger and cooler event. If you went to the concert back in 2012, why not come again to compare the experience? And aren’t you curious to find out what the “new” Guns N Roses is like? We for sure are!

Guns N Roses will not be the only super famous band coming to Paris this summer. If you check our list of events and concerts in Paris this summer then you will for example notice that both U2 and Coldplay will come to the French capital, and just like Guns N Roses they will also perform at Stade de France.

If you want to buy tickets for any of these concerts in France and in Paris, or maybe for the Guns N Roses concert somewhere else in Europe, use the ticket link beneath.

Before arriving to Paris Guns N Roses will perform in Prague on July 4th, at the national day of the United States. Three days later they will perform in Paris, and after their short stay here they will travel to Vienna where they are to perform at Ernst Happel Stadium. That is the arena normally hosting the biggest concerts in Vienna, and it is also the arena were the Austrian national team plays their soccer matches.

For more information about other attractions and activities in Paris, read on in our Paris Guide.