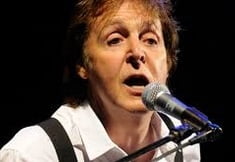 Good news for all the Paul McCartney fans in Paris because McCartney will be on stage in Paris in the summer of 2015.

Paul McCartney is an English singer, songwriter and musician who is best known from the band The Beatles. After the band’s break up McCartney started a successful solo career and he is considered as one of the most influential and most successful musicians of all time.

So Paul McCartney is on a world tour since 2013 with the Out There (tour) in which McCartney will give in total 85 shows world wide (45 concerts in North America, 14 in Europe, 13 in South America, 12 in Asia and 1 in Central America).

McCartney will give two shows in France but only one in Paris, the other concert will be in Marseille. The Paul McCartney concert in Paris will be on Thursday on 11th June 2015 at the Stade de France and previously he will be on stage in Amsterdam on the 7th and 8th June 2015. Tickets for the concerts are already available.

For more information on the tickets check the following site: WorldTicketShop