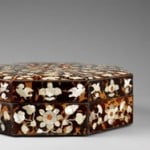 A new and very interesting exhibition will be available in the Louvre Museum in Paris until the end of July 2014. It is called “Birth of a Museum” and if you want to know more about it, then read the press release to follow.

Birth of a Museum offers a preview of the collection of Louvre Abu Dhabi, including a Bactrian “Princess” statuette, a gold bracelet with figures of lions made in Iran almost 3,000 years ago, a rare Archaic Greek figure of a female sphinx, a large bodhisattva from Pakistan, an Italian gold brooch (fibula) encrusted with garnets dating from the fifth century AD, a magnificent Madonna and Child by Giovanni Bellini, paintings by Jordaens, Caillebotte, Manet, Gauguin, and Magritte, a Picasso paper collage never before seen in public, and nine canvases by the recently deceased American painter Cy Twombly.