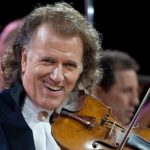 On the last day of March in 2017 Andre Rieu will perform at Zenith de Paris. Would you like to be there? He will only perform once in Paris in 2017, so get your tickets right away!

The last day of March in 2017 is a Friday, so what better way to start a weekend in Paris than with an Andre Rieu concert? This fantastic artist born in 1949 in Austria will tour lots of cities in Europe in 2017. Before coming to Paris he will visit Amsterdam, Brussels, lots of cities in Germany and then it is time for his in Paris. He will only perform once in Paris, but he will visit other cities in France like Lille, so if you miss out on Andre Rieu in Paris, why not travel to Lille for his concert there on April 1st?

Since Andre Rieu is a man with great humor he will probably come with some cool jokes on Fools Day in Lille on April 1st, but he is funny of character, meaning that there will be some cool jokes in Paris on March 31st as well for sure. Andre Rieu will also perform in Dijon and Lyon and some more cities in France before he takes a break on April 7th. His next concert will then be in May in Prague.

Andre Rieu concert in Paris in 2017

Would you like to be there in Zenith de Paris on March 31st? You can buy tickets from Viagogo.

We just read that Zlatan Ibrahimovic never visited the Eiffel Tower during his four years of playing football in PSG. Do not be like him and do the same mistake. Make sure to visit the Eiffel Tower and all the other beautiful attractions in Paris while in town. It is one of the most amazing cities on earth, so when you first come, make sure to check it out for real. You can read more about all the famous attractions, interesting museums and recommended activities here in our Paris Guide!