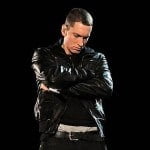 When somebody hear the name Eminem, they imagine a white guy who is a loud-mouthed, hard core rapper. We could hear a lot in his songs about his life, his relationship with his mother, uncle, daughter, friends. So honest, so true, so talented.

Marshall Bruce Matters III was born in the state Missouri in 1972. When he was less than two years old, his father left the family. After that he and his mother moved a lot, and finally they settled down in the city of factories, Detroit. The first time when he heard hip-hop was because of his uncle. After that the young Marshall entered for lots of freestyle competitions and he won a lot from that. He got a name in the hip-hop culture. In 1999 he released his first album, the Slim Shady LP, and he became successful. His world wide known name, Eminem was born in this time too. From that he hasn’t taken a break in his career. He has started his actor career in 2002, when he played the leading part in the movie, 8 miles. He got an Oscar award after this film in the best movie soundtrack category. He has his own record company, and he sponsors the young hip-hop generation.

And finally here is the time for European fans, because the American rapper is going to attend to Europe, to make an enormous party with the inhabitants of the old continent. Don’t miss Eminem’ concert in 22 August 2013 at Stade de France. Be a part of the biggest party of this summer! Have fun!