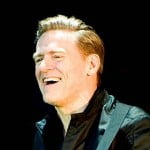 Bryan Adams is a Canadian singer, songwriter, musician and photographer. He is one of the most famous musician of the rock music and he is best known for his husky vocals and energetic performances. In December he will come to Paris!

During his career he sold over 100 millions records which made him one of the best selling music artist and Canadian rock artist in the music industry. He got worldwide known in 1984 when he released his album Reckless. He released his next album Waking Up the Neighbourhood in 1991 which included the big hit (Everything I Do) I Do It for You which became one of the best selling singles. During his musician career he was nominated to plenty of awards. He received 20 Juno Awards, 15 Grammy Awards nomination and he won one Grammy Awards for best song written in 1992.

Bryan Adams is on tour this year celebrating the 30th anniversary of his most popular album the Reckless. He is on his world tour with the Reckless 30th Anniversary Tour from 2014 until 2015. Bryan Adams will be performing in several countries during his tour. He started his tour in the USA but he will be on stage in many European countries and cities as well. He will perform in most of the European countries such as Slovenia, Austria, Poland, Germany, the UK, the Netherlands and France and so on. In France the concert will be held in Paris. Adams will be on stage in Paris on Friday 5th December 2014 at Zènith. Tickets for the concerts are already available.

If you want to buy tickets for the concert you can use the link beneath. For more information on events and concerts in Paris, click here.