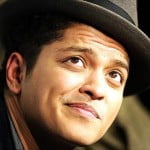 The capital of France has proved it many times that it is not only known to be a romantic city, but it is also a city giving great entertainment opportunities to visitors. In the autumn of 2013 the young talent, Bruno Mars will give an unforgettable concert in this wonderful city.

Bruno Mars, as his original name Peter Gene Hernandez was born in 1985 in the capital of the sunny country, Hawaii, in Honolulu. He was born in music, because his whole family does this type of art. When he was a child he won a talent show, after this he decided he wants to be a singer. Besides, he learned play on guitar, bass guitar, drums, keyboards and harmonica. Bruno Mars became famous in 2010, when his first album, the Doo-Wops & Hooligans released. The album’s most popular song is The Way You Are, which brought a Grammy Award to its creator in the best man pop singer category. His second album, the Unorthodox Jukebox released in 2012 and the singer’s success is growing.

The album release worldwide tour will start in 2013 and its one station is the city of lovers, the French capital, Paris. Bruno Mars will concert in the city of lights on 14 October 2013 in the Palais Omnisports de Paris Bercy.

Organize a wonderful autumn holiday with your love or your friends in Paris. Check the breathtaking Eiffel Tower, go for a walk on the Champs-Élysées, which is the most famous avenue in Paris, and after that at the evening 14 October enjoy your biggest concert experience with Bruno Mars. It will be unforgettable!