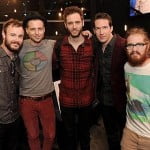 One Republic is an American pop rock band. The band was formed in 2002 by Ryan Tedder and Zach Filkins. They released their debut album Dreaming Out Loud which brought them ultimate fame in the music industry in 2007. From the album, the single Apologize which was recorded with Timbaland brought them worldwide known success and the single was ranked number one on several charts and even won a Grammy Award for the band. One Republic came out with their second album Waking Up in 2009. The singles from the second album such as All the Right Moves, Secrets, Marchin On and Good Life were on the top of the international charts. Their third album the Native came out in 2013 and it became the band’s most successful albums released ever during their career.

One Republic is in tour this year and the following year and they will perform in several countries all over the world. The band is supporting their latest album Native which came out in 2013. During the concert tour they will be on stage in different European countries and cities such as Germany, Belgium, Poland, Austria, the Czech Republic, France and in several other countries as well. In France the concert will be held in Paris at Zènith on Friday 24th October 2014.

For more information on the concert, dates and prices check the following link.

For more information on concerts in Paris, click the link.