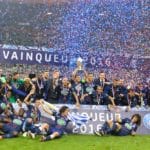 August 4th will be the date for the Ligue 1 kick-off in the new season. Last years champions AS Monaco will play against Toulouse. On August 5th at 17.00 the next match in the new season will be played, and that will be between PSG and Amiens SC.

Amiens SC is a new team in the French top league, and everyone expects their opening match against PSG to be a simple win for PSG. It will probably turn into that, but anything can happen. The match will be played at the home field of PSG, Parc des Princes, and if you want to be there to taste the atmosphere, buy your tickets for the match right away.

The French league will be the first one to start of the top leagues in Europe. The Premier League in England will only have its kick-off one week later, and the German Bundesliga will keep its fans waiting even longer. Luckily fans of French football doesn’t have to wait much, only 1 1/2 week, and then it will be the kick-off for the new French football season.

That might be handy, as it gives the teams more time to play before the big tournaments like the Champions League and the Europe League will start.

Will PSG win Ligue 1 this year?

Last year everyone was surprised that PSG did not win Ligue 1. For the first time in years, another team won the league. AS Monaco was the team to dethrone PSG, but can they keep their place at the top of French football for two seasons in a row? We doubt it, but they have managed to keep quite some of their star players remain in the squad, so maybe AS Monaco will surprise us again?

Press the link above to get more information about the squad. If you simply want to stream Ligue 1 online, then you can read more about how it is done in the IP Address Guide.

There are lots of other great programs and activities to enjoy while in Paris. After all, the world is more than football. So, why don’t you book a river cruise with dinner, some tickets for the Moulin Rogue, pay a visit to the Eiffel Tower, and enjoy some culture at the Louvre museum? The options are uncountable, but that is what makes Paris such a magic city.

Ligue 1 in France isn’t like La Liga in Spain or Premier League in England were there are big celebrities in all teams. In French Ligue 1 PSG is the famous team, but most other teams lack the big profiles like Messi and Ronaldo in La Liga and like Ibrahimovic, Rooney, Kane, de Bruyne and lots of other players in the Premier League.

That is why you will not always find those fantastic matches in Ligue 1, especially not since PSG has been alone on the throne for the last years, and thus making it less interesting to actually follow the league.

Things might change this season, especially as PSG has already lost a match in Ligue 1 to Monaco. But, in the Champions League they have a tradition of performing well, except from in the knockout stage where PSG seem to have a hard time succeeding.

On September 13th it is time for the first Champions League group stage match for PSG and they will play it on Parc des Princes in Paris against Arsenal. That will be a fantastic kick-off for the Champions League this season, and it will be very important for the French team to get a good start on the Champions League. They are favorites in front of the match, but Arsene Wenger is a good coach and he and his team will for sure not give PSG an easy win.

As always the Champions League match will start at 20.45 and if you want to watch the match on the Internet then you can easily do so following these instructions. The best is however to watch PSG against Arsenal on the stadium in Paris, so get your tickets, book your flight and get ready for the match.

Arsenal has not had a terrific start on the Premier League this season, and some people feel as if the time has come for Arsene Wenger to leave the club. If they manage to win against PSG he will for sure get some peace, because PSG is the toughest opponent in their Champions League group. In addition to Arsenal and PSG we can also find Ludogorets from Bulgaria in the group and FC Basel from Switzerland.

Do not forget to enjoy the attractions of Paris while in town, and if you have the time a river cruise is beautiful!