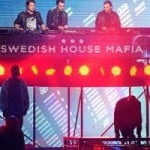 On their last tour before a short pause Swedish House Mafia will visit lots of great places like Mumbai, Dubai, Oslo, Amsterdam, Antwerpen and of course Paris. The Swedish House Mafia concert in Paris in 2012 will be arranged in Bercy on December 8th, which is arranged only one day after the Swedish House mafia concert in Amsterdam. Some days later they will return to Amsterdam again to do two more concerts there. Tickets to all of these events can be bought using the links on the bottom of this article.

Swedish House Mafia is a swedish electronic dance music trio with the members Axwell, Steve Angello and Sebastian Ingrosso. It was formed in 2008 and will do their tour lasting into the start of 2013 before they take a hiatus. Thus if you want to see them this year, you better check out their concert in Paris on December 8th.