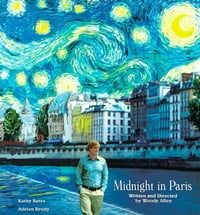 If you love the city of Paris, then you will probably fall in love with the film Midnight in Paris as well. In this Woody Allen film from 2011 you can follow a family taking a trip to Paris which will greatly impact their lives, and then especially the lives of a young couple.

Their lives are not exactly a walk on roses, and that also leads to the guy getting drunk and walking around the streets of Paris in the night. But, when the clock hits midnight something happens and he is taken back in time and suddenly he meets up with great artists and writes from earlier periods in history. This of course changes his way of thinking and his way of living, and not only his life, but also the life together with his girlfriend.

If you want to watch this film from Paris online then you can now both watch it on Amazon Prime in the USA and on Netflix in different regions. You can for example watch it on Netflix in Norway, Austria, Germany, Canada, Sweden, Switzerland, Denmark, Finland and in Luxembourg. If you do not live in any of these regions then you can read more about switching between Netflix regions here. If you would rather watch Midnight in Paris on Amazon.com, and maybe for free as a Prime member, then you can read more about enjoying Amazon Prime and watching Amazon Instant Videos from abroad here.

Hope you are enjoying life and your stay in Paris, and after reading this article you will also have lots of films to watch, first of all Midnight in Paris, and then if you have more time and want to watch more films from Paris, then do not forget that you can also watch the Da Vinci Code on Netflix, another film with lots of scenes recorded in Paris.