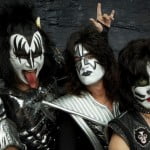 Good news for the Kiss fans in France because the band is back with a world tour since the summer of 2014.

Kiss is an American hard rock band that was formed in 1973 by Paul Stanley and Gene Simmons. The band’s current line up consists Paul Stanley, Gene Simmons, Eric Singer and Tommy Thayer. The band is best known for their face paint and energetic live performances. The most notable songs of the band are I Love It Loud, She, Goin’ Blind, Lick It Up, Parasite and so on.

So since June 2014 Kiss is back with a world tour in which they will give plenty of concerts including Paris as well. The Kiss with the KISS 40th Anniversary World Tour will give all together 93 world wide including Paris, Vienna, Amsterdam, Barcelona, Madrid, Prague, Hamburg, Berlin and so on.

The Kiss concert in Paris will be held on 16th June in 2015. The concert will be held at the Zènith de Paris.
Tickets for the concerts are already available.

For more useful information on the tickets please check the following site: WorldTicketShop